Recently, many people do not know much about the characteristics of disinfectants and Go-touch 1000ml Disinfectant Cleaner and how to use them. In order to avoid damage to people or objects caused by improper use of disinfectants, we should come to know some common household cleaners and disinfectants. 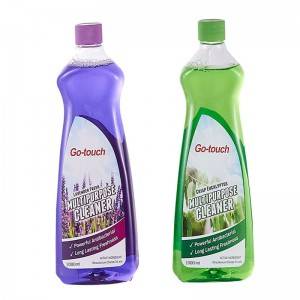 The harm to spray disinfectants and cleaning agents should not be underestimated, because from a chemical point of view, the chemical components of such chemical products are complex, such as indiscriminate use, abuse, and cross-use, which can produce some unpredictable chemical reactions and pollute the environment.

From the perspective of human physiology, most of the artificially synthesized fragrances contain volatile substances, and their harm to human organs, especially the stimulation of the respiratory system, is increasingly exposed. When the particle size of the aerosol mist is 5 microns, it can be inhaled into the alveoli, causing inflammation.

People with allergies can easily lead to allergic rhinitis, asthma, urticaria and other allergic diseases.

In addition, dish soap is only a surfactant, and after using it, it can only help to wash away bacteria, not kill them. On the contrary, it is also easily contaminated by bacteria, and some bacteria also use detergent as a nutrient base to accelerate their reproduction. Relevant Japanese scholars have repeatedly tested bacteria in liquid detergents used by ordinary households and food companies. It is surprising that more than 1 million bacteria were detected in an average of unopened detergents per milliliter.